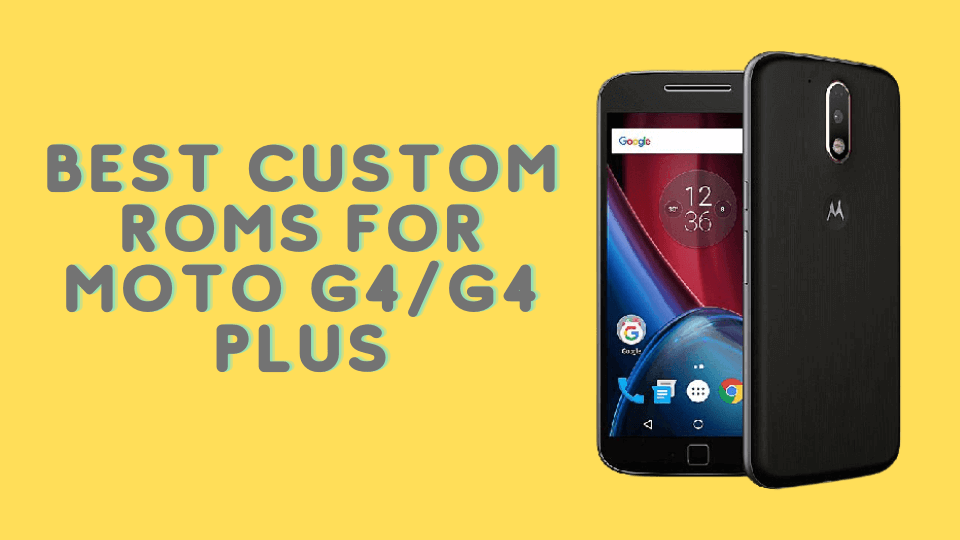 Flashing your device with a Custom Rom has become the new cool thing in the market. And why not! You get amazing features and a better experience in using a Custom Rom.

But, currently, the market is saturated with so many Custom ROMs developed by Individuals.

It has become tough to choose the best Custom ROM for your device. And that’s where we come in.

If you own a Moto G4 Plus and are looking for the best Custom ROMS for Moto G4 Plus then here we have reviewed some of the best ROMs which you can flash in your device.

Moto G4 Plus is actually one of the best budget phones from the Motorola Brand. It was launched with Android 6 and was later upgraded to Android Nougat. The processor used in it is Qualcomm Snapdragon 617. The device comes with 2GB of RAM and storage of 15 GB.

Overall, during the time of its launch, it was considered a good budget device but now times have changed.

Phones are coming with much better features at a lower price. So, to keep up with society flashing a Custom ROM can be a great idea.

Users of Android devices generally customize their smartphones more often than users of other platform smartphones, such as Windows and iOS.

With prior permission from the OEM, most Android smartphones allow boot loader unlocking directly. You can root your phone, modify it and even switch to a completely different ROM.

However, there are few things which you should keep in mind. First, you will need TWRP recovery on your device. It is needed to install any custom ROM. The battery of your device should be above 50% during the process. It is a must to make a backup of your current ROM in case if there is some issue.

Also, be known that changing ROM means you lose the warranty of your product. In the case of Moto G4, it doesn’t matter anyway. You can shift your Internal data to another storage if you want to use it further. At last, be patient. This process takes more than half an hour. So, you don’t have to panic.

Its name implies that this Custom ROM is a Remix of several Custom ROMs. Currently, this project is not under development but thankfully, there are some independent developers continuing the work.

Thus, you do not have to worry about upgrades in the future. Occasionally you’ll get updates unofficially as well. In certain situations though, the ROM might prove unstable on some devices. However, the features you get compensated for it.

Most Custom ROMs actually just copy ideas of other ROMs and put them in their list but Ressurection Remix is different.

Lineage OS is the godfather of all the custom ROMs for Android. This is one of the most popular and widely used custom ROMs in the community. Earlier it was known as CyanogenMod but the project was stopped midway. Later, some individuals carried on with the project and the result is all in front of us.

It is a highly customizable ROM and gives you great stability and security. The Privacy Guard feature gives you control over your applications. The user interface is also quite addictive and in the same place, it is quite productive as well.

Moto G4 users can make use of its LineageOS 18.1 version which will give you a complete Android 11 feel. It is currently inspiring many other custom ROMs due to its open-source code. This ROM is not only focused on giving a personalized interface but also considers performance and stability as a great challenge and does well in those.

Do check out threads on the XDA forum to know reviews from fellow Moto G4 users. Hence, you will be able to decide whether to use it on your device or not.

CrDroid is another big name in the Custom ROM industry. Many people believe that it is inspired by Lineage OS and AOSP extended. But, that’s not the complete story. It has many amazing features which make it unique in the market. Probably, that’s why it is so famous.

You get a whooping 40+ different kinds of customizations. You can customize the status bar, UI, sound, lock screen, and various other parts of your device. This best custom ROM for moto g4 is one of the fastest ROMs on this list. You will get a satisfactory experience if you decide to flash this on your device.

After Lineage OS, Arrow OS is the next big daddy in the community of Custom ROMs. It is also based on an open-source project so it’s natural that it inspires many features from other ROMs. But what makes it unique is its great optimization. You get tons of amazing customizable features which will catch anyone’s eyes.

It is very popular and has over a few million downloads. The user interface gives a very smooth experience to the user and there have not been many complaints about its performance.

This custom ROM for Moto G4 Plus has tons and tons of customizable features. If you are fond of aesthetics and want to have a phone with stylish features then you can flash this for sure. It is built on AOSP open-source code and has is a remixed version like the Resurrection Remix.

During the last few years, it has gained great popularity and is rapidly climbing the stairs to the top. It will be no surprise if it replaces Lineage OS or AOSP extended at the top anytime soon. Although some users have complained about stability issues in the past, constant updates and the addition of new features make it one of the best custom ROMs for Moto G4 users.