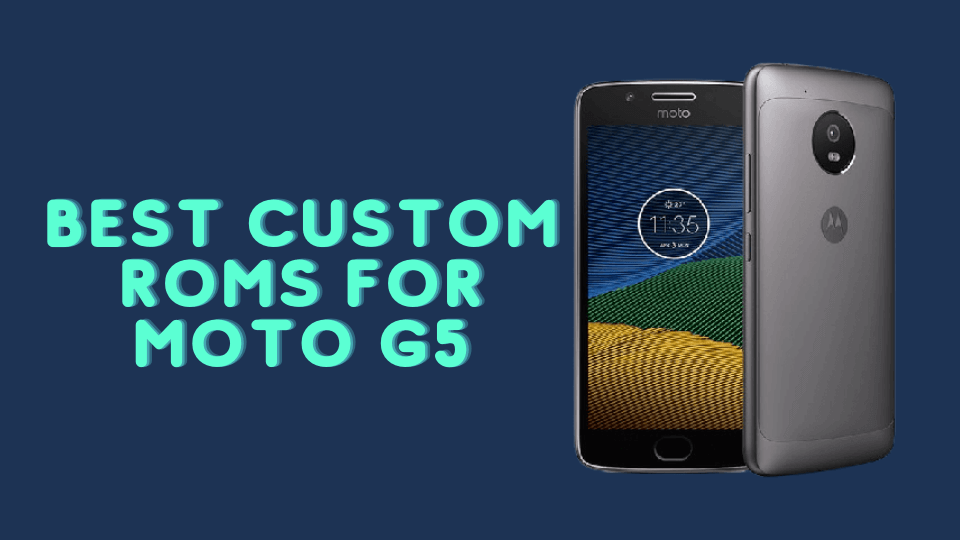 Motorola released the Moto G5 a few years back and we know that the software update cycle for mid-range Android smartphones is not great at all.

This means that without an update, the smartphone can become outdated very quickly as it gets stuck on an older version of Android.

However, there is nothing to worry about for those of you who know how to unlock bootloader and flash custom ROMs because we have the list of best custom ROMs for Moto G5 right here.

For those of you unaware of a Custom ROM, it is basically the firmware that your phone runs. The only difference is that since Android is open-sourced, other Android developers can also make firmware for your phone if its update cycle has ended.

Note that before flashing any custom ROM on your device, make sure to charge the phone’s battery to at least 50% or higher, take a full backup of the device and also keep in mind that flashing a ROM takes time and it can take up to 30 minutes so don’t panic during that time.

Before getting started, note that the official codename for Motorola Moto G5 is Cedric so if you see the name of ROM mentioned as for Cedric, it means that it is for your device only.

Pixel Experience is one of the hottest Custom ROMs in the Android circles and the reason is plain and simple. Pixel Experience ROM, as the name suggests, tries to give you an experience like the Pixel phones and it does that very well.

Due to that reason, people love flashing this ROM on their device, and to the good luck of Moto G5 users, Pixel Experience ROM is available for them as well. This ROM includes all the Pixel exclusive features such as wallpapers, launcher, ringtones, notification sounds, and even fonts.

While we have mentioned Pixel Experience ROM above for the Moto G5, next up in our list is the Resurrection Remix ROM and it is definitely worth noting both of these ROMs are miles apart in terms of features, functionality and user experience.

Both of them are based on AOSP which is of course the base for every Android version as well as Custom ROMs. However, Pixel Experience tries to give you a stock Android experience and makes the device feel like a Pixel phone.

On the other hand, Resurrection Remix developers have added a ton of features to their ROM so that you can customize the ROM on your device to your heart’s extent and you will not get bored to this ROM as easily as maybe one with Stock Android experience.

Next up is LineageOS which we can also call the latest version of CyanogenMod because LineageOS was developed on the same code base as CyanogenMod after they stopped developing one of the most popular Custom ROMs at that time.

It is also worth noting that LineageOS gives you a Stock Android experience, unlike Pixel Experience ROM which gives you a Google Pixel phone-like experience.

In other words, if you flash LineageOS then you will see the raw experience of what Android feels like without Google Apps and other things that Google adds on their device.

However, you can always install GApps on your phone on top of LineageOS so that you can get the look and feel similar to other Android devices while also using Google apps if you are into them.

Arrow OS is a ROM which not a lot of people would have heard of because it is a newly developed Custom ROM that is based on AOSP which stands for Android Open Source Project. As we mentioned earlier, Android needs to be kept open source by Google since it is built on Linux which is an open-source platform as well.

This means we as Android users benefit from the open-source nature of this operating system and can have great custom ROMs that iOS users will never be able to enjoy. Talking about Arrow OS, its developers say that they are trying to keep their ROM as simple as possible.

They add that Arrow OS adds just the right amount of features that are missing from other ROMs and the ones that are actually USEFUL rather than adding stuff that no one is going to use but is there.

Dot OS is also another Custom ROM based on AOSP which means that it will give you a Stock Android experience as well. The DOT in its name stands for “Droid On Time” and the developers of this ROM say that their Custom firmware stands for stability and performance.

Also, they have emphasized at one key aspect for any Android user which is battery life as Dot OS developers claim that they have taken care of battery drain while using their ROM. All the instructions on how to flash the ROM are given in the XDA thread linked below so make sure to check that out as well.

It is worth noting that Carbon ROM can be seen as a new kid on the block but it is definitely a solid option for your device because the developers who have made this Custom ROM have a lot of experience under their belt.

The developers also mention that their ROM is focused on speed, stability and performance and they say that they are committed to fixing bugs and issues as and when they arrive.

As always, the instructions on what you need to prepare before flashing this ROM as well as how to flash this ROM and other needed files have been mentioned in the XDA thread we have linked below so make sure to check that out before doing anything silly with your device.

Last but not the least, we have Havoc OS which you guessed it right is also an AOSP-based Custom ROM. Obviously, each and every Custom ROM you see here will be based on AOSP and it means that they will all look the same when you flash them and boot them for the first time.

However, Havoc OS for the Moto G5 does include a lot of extra features that will help the users such as improvements to the camera system as well as a new kernel known as “Sweet Kernel” which aims to improve battery life as well as the device’s performance in various key aspects.

All the instructions to be followed are mentioned in the XDA thread linked below so make sure to check that thread out.

If you have any doubts or questions regarding the ROMs or regarding the Moto G5 then you can comment down below and we will try to help you as much as we can.