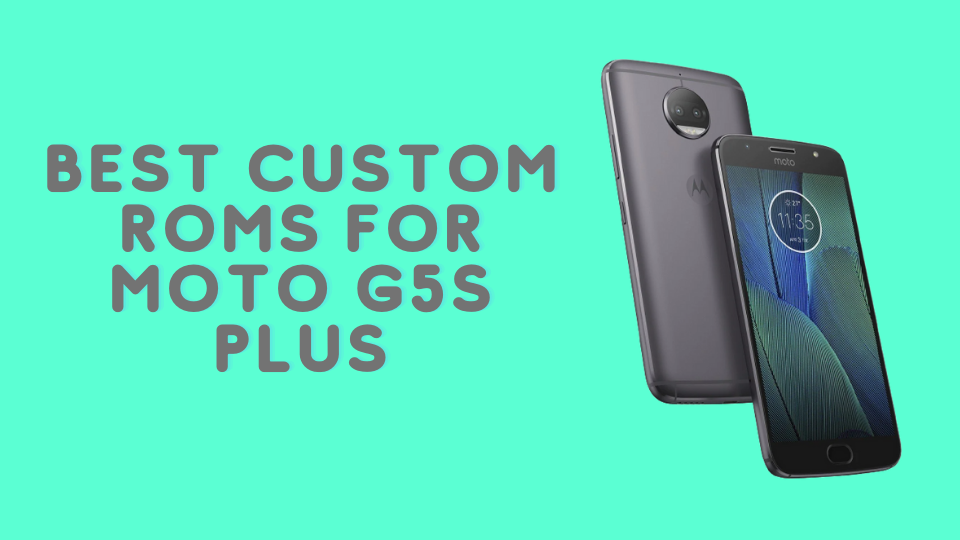 We know that Android is an open-source operating system that means Android developers who want to create a Custom ROM for their phones can build upon the AOSP source code that is freely available to them.

Now, it is worth noting that Motorola released the Moto G5s Plus a few years back and this phone is right there among one of the most popular phones in the company’s lineup.

This also means that a lot of users are still using the phone to date but the sad part is that this phone is not going to receive any official updates.

However, we have got that one covered for you because this article is all about the list of best custom ROMs for moto g5s plus that you can install on your device.

Note that before installing the Custom ROM, you need to have an unlocked device and have a custom recovery installed.

If you are not sure what that means, you will be well advised to not try anything that bricks your phone.

LineageOS needs no introduction in the Android community, specifically the Android ROMs community because it is among the most popular custom ROMs out there.

There are a few reasons for its popularity and one of them is the simplicity of the ROM. Once you install LineageOS on your device, you will feel like your phone is as good as new and you can enjoy the latest version of Android as well.

In this case, we have LineageOS 18.1 for the Moto G5s Plus which means that you can get the taste of Android 11 after flashing this Custom ROM on your device.

We would also like you to go through the entire XDA thread linked below so that you understand each and every part of the process and there are no chances left of anything going wrong.

Next up is ShapeShift OS and this custom ROM has made its name very quickly in the Android community because of its features and the unique aspects that the ROM offers.

Unlike LineageOS which gives you a feel of Stock Android, ShapeShift OS will give you a totally unique look and feel on your device thanks to everything being custom on this ROM.

We can say that this ROM is a hybrid of Custom Android skins such as OneUI, MIUI, and others while still having the salient features of Stock Android inside.

With ShapeShift OS as well, you will be able to enjoy all the features that Android 11 has to offer. Another Android 11 ROM in this list of best custom ROMs for the Moto G5s Plus is the Evolution X ROM which is built on Stock Android as well.

It is worth noting that the developers of this ROM have kept the features of their ROM very much a secret and they say that you will know all the features when you flash this ROM on your device.

Therefore, it is best to install the ROM on your device since it is stable and has been based on Android 11 which means there is no harm in trying.

What we have seen so far from the screenshots is that it is pretty similar to the Google Pixel UI which means you will feel like using a Pixel phone after flashing this ROM.

If you have never heard of Pixel Experience ROM despite being in this community, you have either heard of Custom ROMs for the first time or are living under a rock.

We say this because Pixel Experience is considered as one of the best and most premium Custom ROMs right now because of its features, support as well as the experience and stability of using it.

One thing we can proudly say is that the name does justify its experience. You will not only have a “Pixel Experience” after flashing this ROM on your device but your entire phone will be converted into a Pixel phone.

That is because this ROM contains all the Pixel exclusive features such as sounds, ringtones, notification tunes as well as wallpapers exclusive to Pixel and the Pixel launcher as well.

The best part is that this ROM is also based on Android 11 so experience the goodness of using a Pixel phone along with the benefit of using the latest version of Android.

Resurrection Remix is also one of the ROMs that does not need an introduction because of the consistency with which its developers have maintained as well as added features to this ROM and it is for everyone to see.

If you have ever used Resurrection Remix ROM on any of your device, you will agree with us that you literally get tired of customizing each and every part of this ROM and still miss out on a few things here and there.

One thing that might disappoint you is that this ROM has not been ported to Android 11 for the Moto G5s Plus but there is nothing to worry about as its features are such that you will not need to have any Android 11 features missing since most of them are baked into this ROM from Android 9 itself.