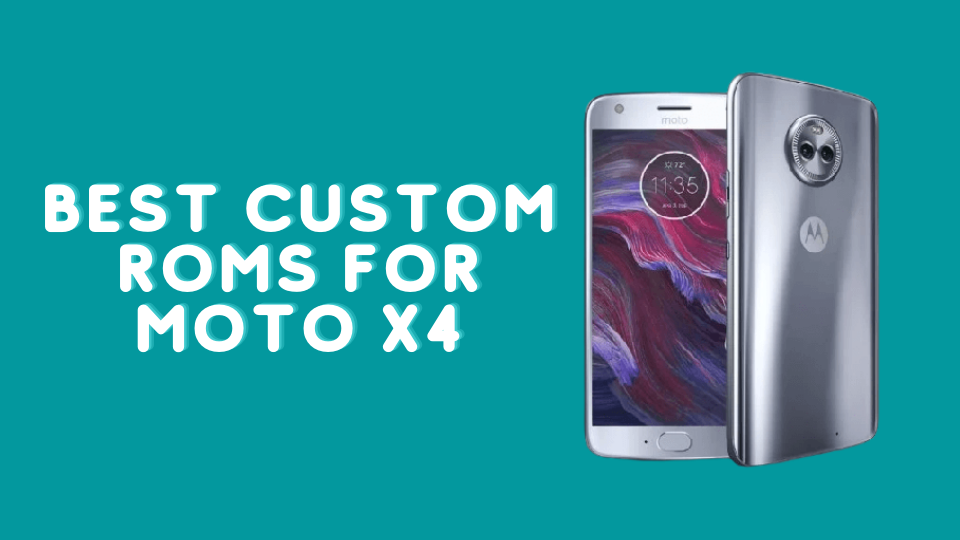 With a sharp visual appeal and intrinsic specifications, the Motorola Moto X4 is certainly one of the most appealing budget smartphones available.

It packs several unique features that make it a highly reliable and dependable workhorse.

However, if you’ve been using it for a while, you might be overwhelmed with the same user interface.

Moreover, it also has been officially discontinued, and the phone is still operating on Android 9 which is obviously outdated.

Thankfully, there are several Custom Roms developed by android enthusiasts of XDA-Forums.

With that said, let’s take a look at the five most prominent Custom Roms available for Moto X4 with the latest software versions to revive your old companion.

While the development of this ROM was halted after the initial release, the developers continued progressing it after receiving a lot of requests from satisfied users. It certainly redefines the concept of custom ROMs by taking personalization to the next level.

This ROM features several customization features that help you modify every aspect of your smartphone. From themes and buttons to the navigation bar and power menu, there’s a lot to explore in this custom ROM for Moto X4.

It also allows you to choose your desired background color with support for both gradient and accent shades. Moreover, you can choose from nine different themes, each tweaked to make your user experience one of a kind.

There’s also a myriad of icon packs for charging status, 4G, Bluetooth battery percentage, and a lot more. The ROM also allows signature spoofing that you may find helpful to bypass application-level security through interpretation of being a different application.

As the name suggests, the Ancient OS offers you a unique experience with retro vibes and OneUI-based touches. It packs several customization features for the status bar through mods and different icon packs to choose from.

The developers have done a great job in header styles by providing several new dates and clock styles. There are also several engaging patterns in the settings application. If you’re looking for a custom ROM for gaming, this one certainly fits the bill for you.

It excels in terms of both ease of usage and diversity of features. In the most recent version, there’s a feature named QS tint mode that allows you to choose from two different hues namely disco and random for an interactive experience.

The Ancient OS is ideal for a smooth experience and resembles the stock android greatly in terms of stability. However, you may notice that it’s unable to run external camera applications like Google Cam, which may hinder your usage a little bit.

When it comes to the credibility of Custom Roms, nothing can beat the competency of LineageOS. It has been officially made available for Moto X4 with loads of exciting features to make your user experience one of a kind.

Moreover, while the ROM is pretty simple and stable, there are still some areas that require improvement such as ram management and charging animations. Additionally, the FM radio app doesn’t work as of now, but developers are aware of the bug and working on a fix.

There are several major tweaks in the LineageOS recovery mode as well, and now it provides an engaging and colorful UI with easier accessibility. The latest version of this ROM has a different codebase, designed specifically to support the source code of Android 11.

Talking about the famous Addon.d module of LineageOS, it’s also upgraded to V3 with more system partitions to help you make backup and restoration easier in /product, /vendor, and /system_ext.

Below are the required external links that’ll help you with the installation process.

Even though being an unofficial ROM, the Corvus-OS is pretty stable and offers several exciting customization features. It includes various theme-based options such as accent picker and style variations to personalize your smartphone usage experience to a great extent.

To provide a modern and minimal look, the edges are rounded and there are several predefined animations to choose from. There’s also a game mode that offers you an immersive playing experience for a variety of high-end games.

Unlike most Custom Roms available for Moto X4, it has the least number of issues. The adaptive brightness and nigh-light capabilities surely fit the bill for you, especially if you use your smartphone majorly at night.

Contrary to its name, the Superior OS strives to offer you a satisfying experience with its minimal and clutter-free user interface. It features several animation tweaks, along with a completely new set of stock applications that make it exceptionally fast.

It also provides a Dolby audio mod with an exceptionally high level of details that make sounds clearer and louder. The recent update also packs a new kernel with greater stability and power that obviously fixed a lot of bugs and glitches too.

The point of interest for this custom ROM is its lock screen that reflects numerous features such as blur customizations, media art, and visualizer. This allows you to personalize your lock screen as per your preferences to gain an engaging experience, every time you unlock your phone.

The development is still active and you’ll likely receive several new updates with better features, patches, and fixes. Additionally, as it’s based on AOSP, you need to have the latest stock ROM installed in your Moto X4 before flashing the Superior OS.