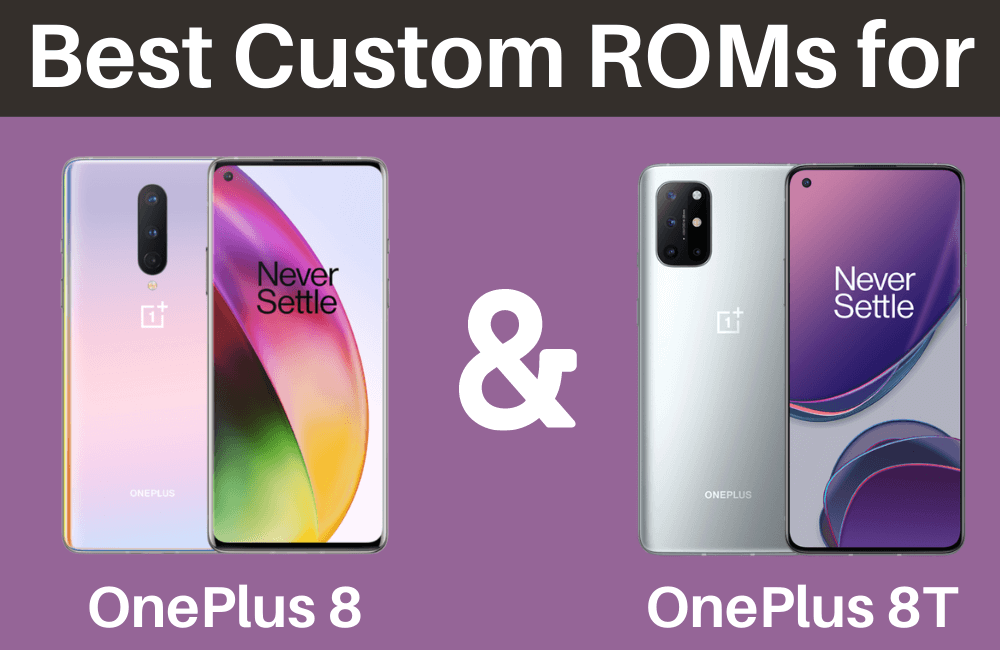 OnePlus smartphones are primarily famous for their impeccable hardware and device specifications.

However, they’re also known for including several bloatware apps that hog up your precious space and memory that could’ve been used for the more optimal performance of your device.

Although the smartphone itself is highly capable and provides a nice user interface, you may likely feel the need for customization after using it for a considerable amount of time.

By using custom ROMs for the OnePlus 8 and 8T, you can solve a majority of these problems with ease.

While several custom ROMs are released for these high-end devices regularly, you need to be clever with your choices to prevent any unprecedented issues with your smartphone.

To make things easier, here’s a list of some of the best custom ROMs for the OnePlus 8 and OnePlus 8T

Before you get started with the best custom ROMs for either the OnePlus 8 or the OnePlus 8T, it is worth noting that there are codenames assigned for both smartphones by OnePlus.

As far as the OnePlus 8 is concerned, its codename is given as Instant Noodle whereas the codename for OnePlus 8T is kept as Kebab by OnePlus. (Don’t ask us why these names are kept as they are :P)

So if you want to find the ROMs for the OnePlus 8, we have mentioned them as Instant Noodle down below in the downloads section whereas we have marked the ROMs for OnePlus 8T with the phone name itself.

Based on AOSP, the Shapeshift OS is a custom ROM that provides you a one-of-a-kind user experience with an impressive user interface and loads of features. The development of this ROM is hyperactive and the contributors actively make changes consistently.

It includes Google Apps by default and you don’t need to flash them externally. The ROM involves a lock screen weather widget and settings interface inspired by Pixel and allows legacy apps to run in a full-scale display mode for immersive usage.

The power menu background is blurred to give this ROM an aesthetic look and feel. Additionally, you can also choose from numerous artistic media for lock screen interface with a slew of filters and custom clocks as well as QS tiles.

There are several performance-related tweaks in this ROM too such as ringtone audio focus and adaptive playback to extend the capabilities of your smartphone. It’s certainly a great custom ROM for a fresh and unique user experience.

Abbreviated as AICP, the Android Ice Cold Project features some of the most skilled developers on XDA that make this ROM highly promising. It includes several never-seen-before features like host file modification that allows you to block annoying ads on your smartphone.

Besides, as in earlier releases, this version of AICP also provides you a predefined system UI tuner with loads of personalization options, along with the ability to choose the number of notifications that appear on your lock-screen, unlike other ROMS that only allow you to either enable or disable them.

Moreover, if you’ve ever been annoyed with the slow timeout of the volume-adjustment dialog, you can modify it too using this custom ROM. It even allows you to change the actions of hardware buttons located on your smartphone.

There are numerous battery status indicator animations and colors to choose from, along with fully customizable button light settings and icon shapes. Talking about the changes in the latest version, it features enhanced Launcher3 and AICP-Extras with multiple customizations.

If you’re primarily concerned about the stability and performance of your OnePlus device, Dot OS definitely fits the bill for you. Along with a great look and feel, this ROM also takes care of your battery usage and tweaks your device to provide optimal performance.

By installing this ROM, you can surely get the most out of your device through various features and bug fixes. It provides a refreshed user interface with a brand-new customization app to personalize your device as per your preferences.

You can select your desired accent overlay through the RGB picker and choose from various styles for battery icon and percentage indicator. The ROM also offers you a traffic indicator and options for customizing the clock widget for a geeky experience.

There’s also a new theme manager app that allows you to choose from hundreds of different themes. Furthermore, it also contains some additional features like tapping actions and hardware key actions for an added flexibility.

The developers have also included offline charging animation similar to Pixel and feature hacks that help you bypass root detection and SafetyNet. This allows you to use applications that are designed to work only in non-rooted devices for safety purposes.

With an intuitive and artistic interface for settings and status bar, the BootLeggers is one of the most unique custom ROMS you’ve ever seen. It features some cool icon shapes and battery status indicators that make it different than the others.

The lock-screen interface contains different clock styles and there’s also a color control option that allows you to specify your desired RGB values in addition to numerous accent colors to choose from. The latter also includes K-Lapse settings that allow you to specify dimming rate and pulse frequency.

The theming options for this Custom ROM are nearly endless and the quick-setting icons are intentionally kept large for easier access. The build also includes preinstalled Google Apps that minimizes the risk of bugs as well.