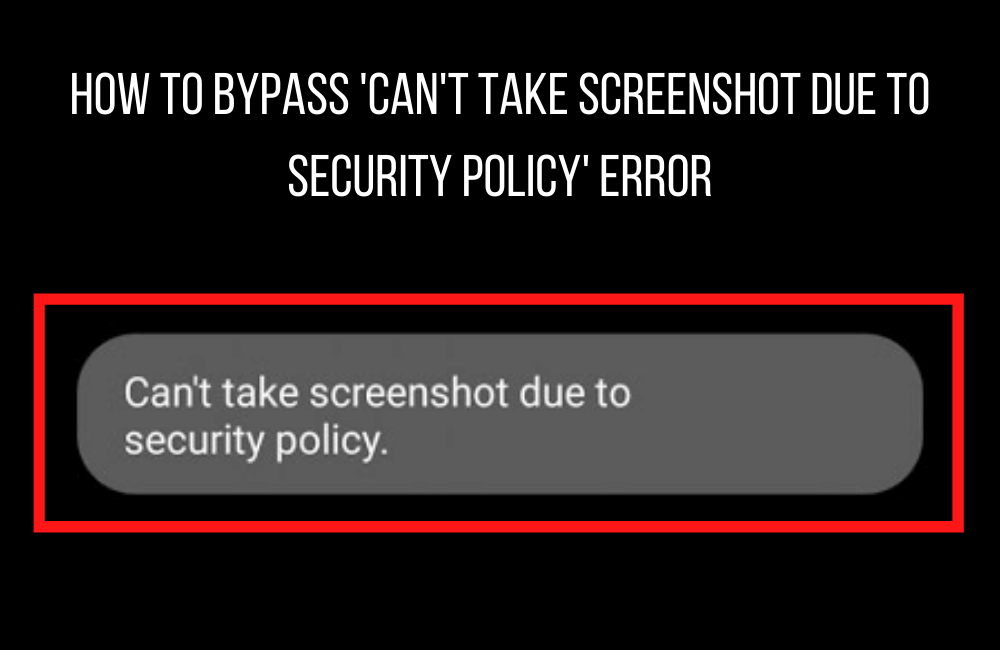 The screenshot is essential nowadays. It can be used to capture the screen with any useful information, saving chats, saving a record on a game, and what now.

But many times users do face issues with taking a screenshot.

They see the message ‘can’t take screenshot due to security policy’ error, which prevents them from taking the screenshot.

If you also encountered this issue, then you are at the right place. In this article, we will be discussing the reason for the ‘can’t take screenshot due to security policy’ error to occur, and how one can fix it.

Also Read: How to stop WiFi from turning on automatically on Android

Why does the ‘can’t take screenshot due to security policy’ error pop up?

Well, there are various reasons as to why this error may occur on your computer. The most common reason are- incognito mode, app privacy, and phone privacy.

When you are in incognito mode on Chrome, then you will not be able to capture a screenshot.

Various apps have a policy that prevents users from taking screenshots. Because of this policy, users are not allowed to take screenshots and neither share screens to TVs or computers.

You will see such restrictions in OTT apps. For instance, you can share a screen when Prime Video is on, and neither you can take a screenshot on the Prime Video app.

You will find such restrictions in various apps and that’s because of the policy set by them.

In this case, you should prefer contacting the customer care of your phone and get it sorted.

These were some of the reasons due to which you might encounter the error ‘can’t take screenshot due to security policy.

If you encounter an error, you need not worry about that. We will be discussing how you can bypass the error and take a screenshot on your phone.

How to bypass ‘can’t take screenshot due to security policy’ error?

Now that you know what are the reasons because which you might encounter the error, let’s discuss what are the possible fixes for it.

Close Any High-Security Apps Running In the Background

If you are unable to take a screenshot, then ensure these apps are not running in the background.

Of course, you will have to notice the app that you installed after which you faced the issue.

Uninstall the app that you have installed recently and check whether you are getting the same error while taking screenshots or not.

Some phones have settings to enable the phone to take screenshots. Go to the settings of your phone and check whether the screenshot toolbar is enabled or not.

If the screenshot toolbar is disabled then that means you haven’t given your phone permission to take a screenshot and that’s can be the reason why you were facing this error.

What you can do is enable the screenshot toolbar and you will have given your phone permission to take the screenshot. See if it solves the problem or not.

Ensure You Have Enough Storage On Your Phone

However, note that various apps do come with privacy threat so you need to be assured the app you are using are safe to use and doesn’t store the screenshot that you take using the app.

You can read the reviews of the app on the Playstore or Apple App Store and check whether the app is safe to use or not.

Yes, you can also take screenshots using the help of Google Assistant on your phone. Google

Assistant comes preinstalled on your phone, so you need not download it from the PlayStore.

When the app is opened, launch the Google Assistant on your phone.

To do so, simply say ‘Hey Google’ if you have turned on voice command, or press and hold the Home button to launch the Google Assistant.

In case you have turned on gestures and not the navigation button, then you can swipe up from the bottom edge of your screen to launch Google Assistant.

Now there will be a ‘Share screenshot’ button. Tap on it, and you will be able to save the screenshots from the app which were restricting you earlier from taking the screenshot and giving the error ‘Can’t take screenshot due to security policy.’

Hope that solves your problem. If the problem persists, then you should try contacting the customer support of your phone and explain the problem to them. They will help you sort the problem.