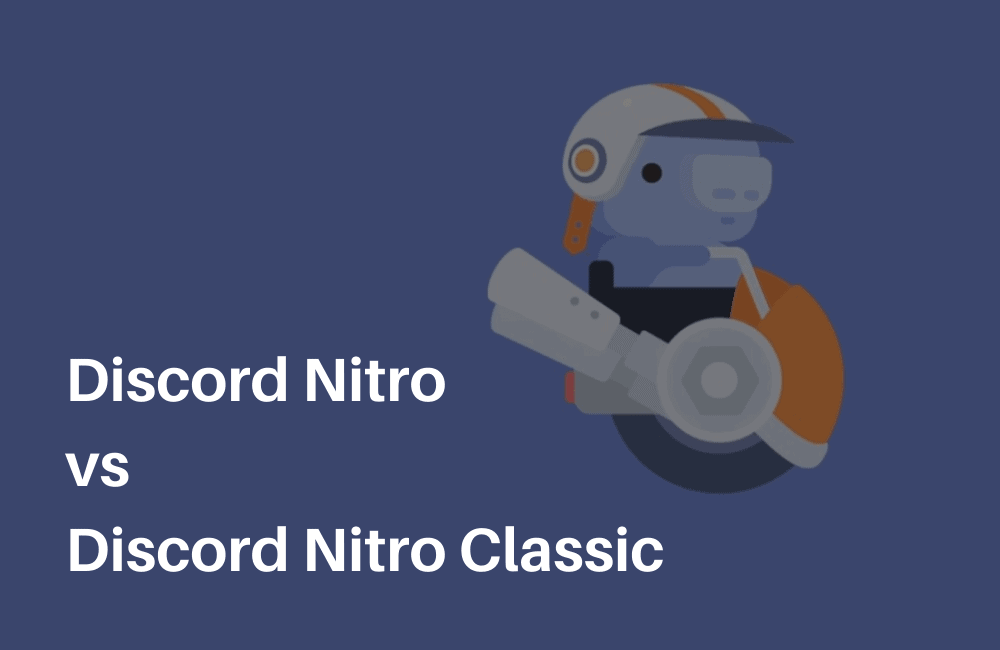 We know that the popularity of gaming platforms has taken a rise ever since the pandemic started because of the fact that people have more time on their hands now due to work from home culture.

However, out of all the gaming platforms, the one that has been the most popular is Discord and we know people love it.

People using Discord also want to know about Discord Nitro vs Discord Nitro Classic. What are they? Why are they introduced? What features do they provide which are not available in the free version? etc …

In this article, we tell you all about Discord Nitro vs Discord Nitro Classic and what are the differences between them, and why you can use the Discord free version as well.

It is worth noting that while everyone starts by using the Discord free version when they login to the platform for the first time, they eventually upgrade to the paid plans from Discord which can either be Discord Nitro or Discord Nitro Classic.

Now, you will be wondering why you can’t use the Discord without paying then here are the limitations of Discord’s free version:

Also, Discord does not force you to join any of the paid upgrade plans as you can use Discord for free for a lifetime.

We know that a lot of people use Discord casually and they do not join 100s of servers at once so they can use the free version without any issues.

What is Discord Nitro?

Discord Nitro is the first of the two subscription options from Discord which removes almost all of the limitations that you have with the free version of Discord.

With $9.99 per month or $99 per year, you can upgrade to Discord Nitro and get all the benefits that we have listed down below:

Go-Live is a feature inside Discord that allows you to stream your game to a group of people just like Twitch and Youtube.

With Discord Nitro, you can upgrade your Go-Live stream at 4k/60fps. You can also video chat and screen share in the DMs at the same time.

Discord Nitro allows you to share emojis on any server at any time no matter if they have been customized on a different server or you have it in your library.

Discord Nitro offers you a variety of avatars that are both animated and in GIF format.

Apart from these features, you get two additional Discord server boosts that are included in the Discord Nitro subscription.

So if you upgrade to Discord Nitro for the whole year, you get 24 server boosts per year and each server boost costs you $4.99 per month which essentially covers your cost.

Discord said that “We designed Nitro so that it enhances the core experience of Discord, but it shouldn’t feel necessary for anyone who can’t afford it, or who doesn’t want to spend the money on it.”

Discord realized that Discord Nitro was expensive for users who did not need two server boosts and the additional features that its Nitro plan offered.

Also Read: How to download Discord Profile Pictures of other users

What is Discord Nitro Classic?

With the launch of Discord Nitro Classic, the company aimed to attract users who were using the free version of Discord and only needed a few additional perks for half the price.

So Discord Nitro Classic was introduced at 4.99$ per month or $49 per year where you get a lot of features not available in the free version.

Here are the perks that you get with Discord Nitro Classic:

You must be aware that everyone has a Discord tag with the user profile. With Discord Nitro Classic subscription, you can customize this tag as per your wish.

Note that this tag will randomize once your Discord Nitro Classic subscription ends.

Like Discord Nitro, you can upload custom emotes to any server and it does not matter if they are customized in other servers or not.

With Discord Nitro Classic, you can upload files of up to 50MB in size. Note that this limit was 100MB in Discord Nitro but only 8MB in the free version of Discord.

However, it is worth noting that costlier always does not mean better as we think that Discord Nitro Classic offers great value for money at $4.99 per month or $49 per year.

Also Read: How to spoiler an image on Discord Mobile

We are sure you must be confused about which one to get between Discord Nitro and Discord Nitro Classic now that you have read all about it above.

Well, don’t worry as we have made pointers for you to make your decision easier.

If we were to decide or help someone make a decision between Discord Nitro and Discord Nitro Classic, we would ask them first about their Discord usage.

The same applies to you as well. You need to first determine how much you use Discord on a daily basis and also what are features you need.

If you are fine with all the features of Discord’s free version then you are a casual user and don’t need to subscribe to any of these plans.

On the other hand, if you join multiple servers on Discord but don’t go above 100 servers then you can get the Discord Nitro Classic plan.

If you are a Discord Ninja user meaning that you have joined 100s of servers at the same time and want all the perks as well as server boosts then you need to get Discord Nitro.

Feel free to share this article with your friends and fellow Discord users who are also confused between Discord Nitro vs Discord Nitro Classic.

We are sure that our guide will help them make a decision between the two. Also, let us know which plan you eventually subscribed to.