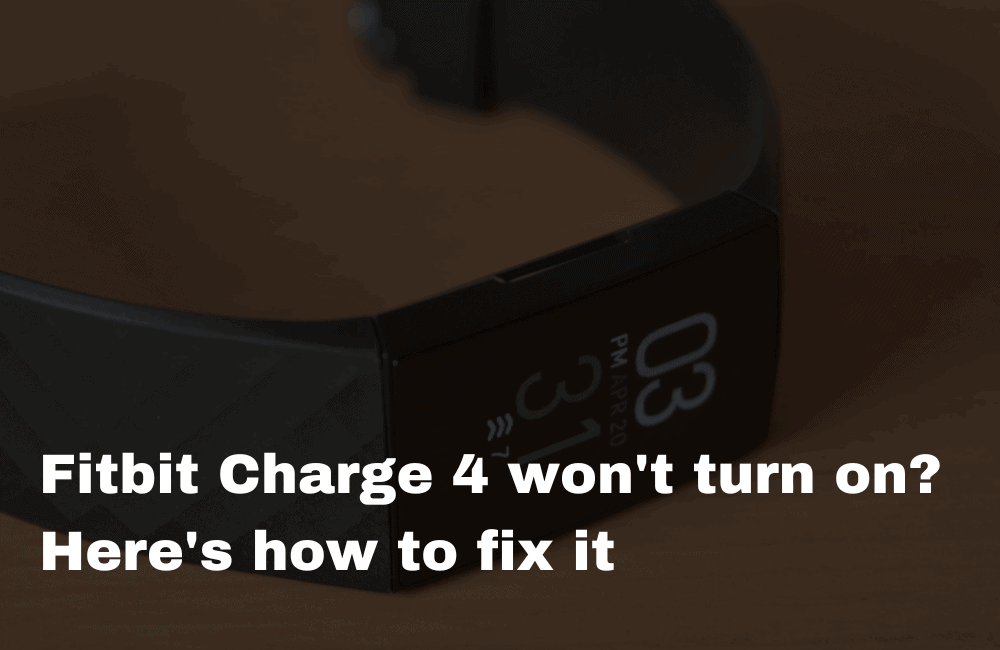 Fitbit devices are one of the most popular fitness tracking devices out there and and you can monitor your activity levels while wearing them as well.

Now, we have seen that Fitbit users are complaining that their Fitbit Charge 4 won’t turn on and if this is the case for you as well, we will tell you exactly what you need to do.

If this is the case with your Fitbit Charge 4 as well then you are at the right place because in this article, we are going to show you how to fix the Fitbit Charge won’t turn on issue once and for all.

How to fix Fitbit Charge 4 won’t turn on?

There are 8 potential fixes that we can apply to our Fitbit Charge 4 in order to solve this problem which we have mentioned down below:

Once you turn on your Fitbit device, the smiley face and Fitbit logo will appear.

Now, if your Fitbit is not turning on then what you can do is press and hold the button for about 10-12 seconds.

After that, you can release the button and check if the Fitbit is turning on.

You will see a battery icon appear on the screen and Fitbit Charge 4 will vibrate when it gets restarted.

It will now allow you to setup the device and work as expected.

Connect the Fitbit device to a charging cable that came with the device in order to not have issues with usage of third-party chargers or cables.

Now, charge your gadget to 100% which might take around an hour or two depending on your charger and wall outlet speeds.

Plugin your tracker as if to charge it and the USB end should be inserted into a USB port.

Fix #3: Plug and Unplug the Charger.

If you see that the above methods are not helping then what you can do is plug in the charger of your Fitbit device and then disconnect it and let it sit idle for 20 minutes or so.

After that, you can try to connect the charger once again and see if the Fitbit Charge 4 starts charging and is turning on or not.

Also, we have seen that the problem of Fitbit Charge 4 won’t turn on is related to your charging port as well.

If there is dust accumulated in your Fitbit Charge 4’s charging port then it will not charge properly and due to low charge, the device won’t turn on.

Make sure to turn off the Fitbit Charge 4 while you are cleaning its charging port.

Fix #5: Wipe off the Screen of Fitbit Charge 4.

Use a microfibre cloth to wipe off the screen of your Fitbit Charge 4 as well because it is possible that sweat and dust gets to the screen as well and it could cause problems to your device not turning on.

If you think that your Fitbit Cable or Adapter is having problems then you can replace it with a new one so that the problem goes away.

It is quite possible that as the cable or adapter ages, it becomes weaker and eventually does not work at all.

Use a different charging cable or a wall adapter lying around at your home and see if the Fitbit Charge 4 starts charging with the new cable or adapter.

It is possible that an incorrect setup of your Fitbit Charge 4 could cause problems with it not turning on as well.

In that case, what you can do is contact Fitbit Customer Support and ask them to redo the setup for you and they will be able to help you in this case.

This will take about 15-20 minutes on the phone or you can visit the nearest service centre as well.

If everything else fails and your Fitbit Charge 4 won’t turn on or it is showing black screen then you need to contact Fitbit Customer Support from here.

You can have live chat with the Fitbit Customer Support or have a call with them and they will help you troubleshoot the problem and give you a precise solution.

Basically, this is all you need to do in order to fix the Fitbit Charge 4 won’t turn on issue and we have mentioned that the last resort is to contact Fitbit Customer Support.

However, we are confident that the fixes we have mentioned will help you solve the problem without the need to contact Customer Support because it did help us and many of our friends as well.

If you feel that this article is helpful then feel free to share this article with your friends and family and let them know how they can also fix their Fitbit Charge 4 won’t turn on issue.