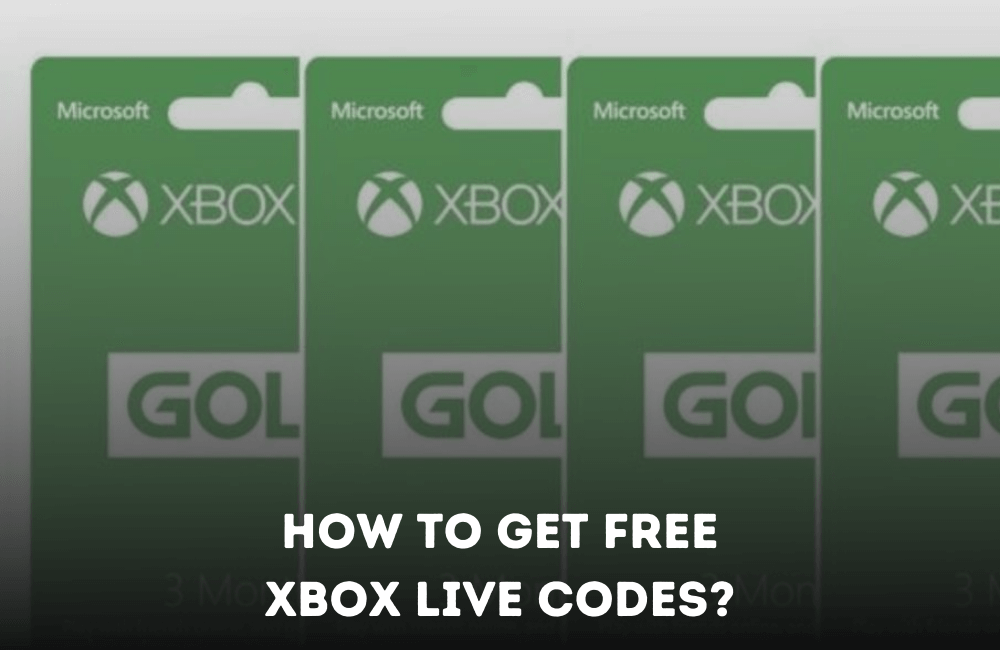 Known for its support for some of the most renowned gaming titles, Xbox has always been a preferred gaming console for millions of gamers.

All five generations of this console have sold extensively, making it a piece of top-selling gaming equipment in the market.

Microsoft even released an online community known as “Xbox Live Gold” that allows players to download and play new games from the convenience of their home by making them available for purchase through Xbox Live codes.

As there’s a constant requirement for new content in the gaming industry, the platform proved to be a prominent spot for gamers to access their favorite content.

There are even several free Xbox Live codes shared on the internet that allow you to access free games, like shared in this article.

What are Xbox Live Codes?

Often termed as Xbox gift cards, these live codes can be used on the Xbox Live Golf platform and Microsoft Marketplace.

With these codes, you can purchase your desired games regardless of whether they’re early access, on sale, or listed as a premium item.

The code consists of 25 characters that consist of alphanumerical characters separated by a hyphen in groups of five characters.

Here’s a list of features and functions offered by Xbox Live codes to help you understand their use better:

With the aforementioned features, Xbox Live codes seem to be very effective for a great gameplay experience.

That said, let’s take a look at the ways to get free Xbox Live codes to get your favorite games or content absolutely free of cost.

How to Get Free Xbox Live Codes?

Before knowing about the various ways to get free Xbox Live codes, keep in mind that there is no such thing as automatic code generators for Xbox Live.

Any website that claims to generate these codes for free is a scam and you may end up getting your data hacked.

That’s because these codes are generated using cryptographic algorithms that only work one way.

These strings cannot be reversed and decrypted, which means it’s not possible to generate a working key automatically.

1. Use Bing to Get Free Codes

Although it’s not known by many people, Microsoft’s search engine Bing rewards its users for using the platform as their default search engine.

For each search you make on Bing, you’ll receive some points that can be redeemed for Xbox Live codes.

As Xbox has many fans around the world, there are surely numerous communities built around the concept.

For those who don’t know, Swagbucks is a platform that provides reward points to users for completing online surveys.

These accumulated points can be used to purchase Xbox Live codes from the platform’s redeem section.

Xbox Live provides temporary 14-day access to the gold subscription of Xbox Live. During the trial phase, you can access all your desired content without spending a penny.

However, make sure that you cancel your subscription before the trial period expires.

Similar to Swagbucks, Life Points is also a website that rewards you for completing surveys.

The points you collect through the surveys can be redeemed for Xbox Live codes. Moreover, the platform pays comparatively higher than Swagbucks.

Vindale Research is the only site out there to offer real money instead of reward points. You can earn as much as $50 per survey on this website.

Many people use it to get Xbox live gift cards or codes by purchasing them through the earned money.

App karma Rewards is a free app that allows you to earn points by completing small tasks. You can redeem these points for cash or free Xbox Live codes.

Although this app is no longer available on the Play Store, you can still do this by getting the app from the internet.

This app provides free gift codes. It’s also possible to get free stuff, which can be used in your favorite games.

Appstation lets users earn points in games in order to buy rewards or trade for other rewards, including Xbox Live Gold Memberships.

This app is for Android users and consists of a great variety of items available to redeem.

1. Can You Get Free Xbox Live Codes?

There are certain websites on the internet that allow you to get Free Xbox Live codes by completing small tasks and surveys.

Some of these sites even pay you for playing games and earn Xbox Live codes without spending a penny.

If you haven’t signed into Xbox.com before, you can create an account by visiting Subscriptions under ‘My Account’ at the top right and entering your email address.

Then, choose Subscriptions in the dropdown menu under ‘My Account, you can see if there’s a one-month free trial available in your region.

3. What’s the difference between Xbox Live and Xbox Live Gold?

The difference between Xbox Live and Xbox Live Gold is that one is free while the other is a paid service that enables you to play multiplayer games online.

There are many ways to get free Xbox Live codes, but only a few of them work. If you don’t want to spend your hard-earned money on these codes, there are some other options available for getting free ones.

As you can see, there are many different ways to get free Xbox Live codes. All it takes is a little research on your part and you’ll be gaming on the cheap in no time!

Rob Smith is the Founder, Owner, and also Chief Editor at TheAndroidLab and he looks after all the daily stuff that takes place here. If you have any queries related to this site, you can contact him via email at [email protected] or on his Twitter handle.