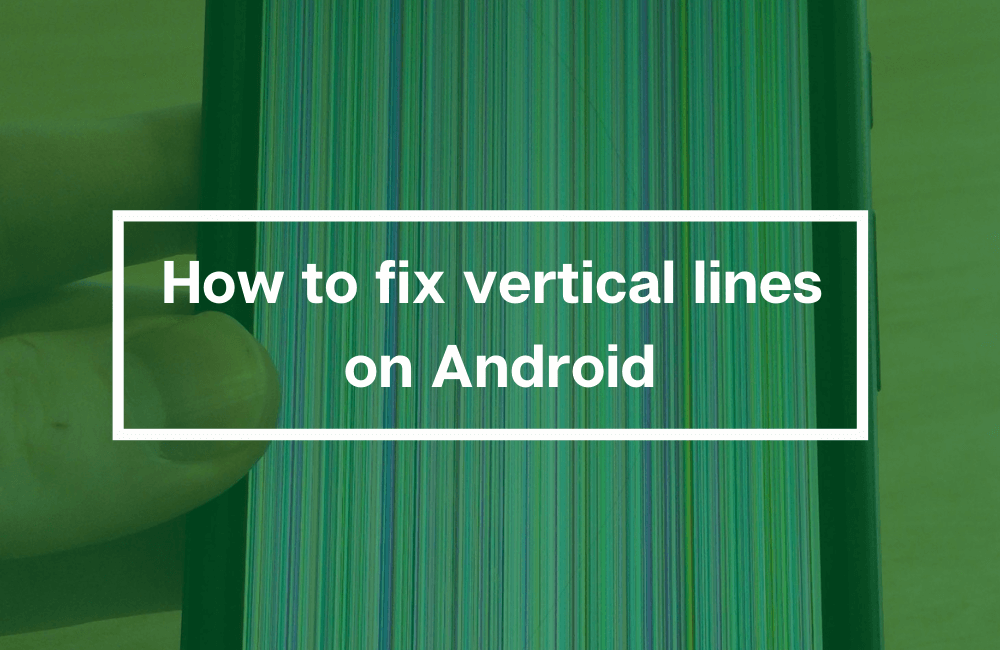 I really know how it feels like when you have the black or purple vertical lines in the middle of your Android phone and they are quite annoying, to say the least.

It is because my phone had the same vertical lines issue and this is common on Android phones as I have seen multiple reports regarding the same on other forums as well.

Now, you would say that if the problem is just a line down the middle of your screen you can manage it somehow. But no, I have tried to live with it but the problem is that the tiny vertical line could be an issue that can damage your entire display if not fixed in time.

Also, it is worth noting that you would have seen this vertical lines issue on older Android phones or Android phones that come at very cheap prices. And there is a proper reason for that being the case.

Well, it has been seen that this vertical lines issue is very common on Android phones with LCD panels which means it can happen on your iPhones that have LCD panels as well.

But right now, we need to concentrate on how to fix the vertical lines issue on Android phones so we will do that.

So as we mentioned, this issue is common on Android phones with LCD panels and this can either be a hardware issue or a software one as well.

If you are lucky then the vertical lines issue on your phone could be a software issue and if that is the case, it is somewhat easy to have a solution to the problem.

Also Read: How to perform Inspect Element on Android

However, if it is a hardware issue meaning that either your display panel or its belt has a problem then you need to visit the manufacturer’s customer care or go to a phone repair shop to get your display replaced.

There could be a software glitch or some culprit apps that could be adding a vertical line to your display and you just have to find that app out or take action to revert the issue.

But the problem is that you first need to find out if it is a hardware issue or a software glitch.

Well, we have a very simple solution on how to find out if the vertical lines on your Android phone are hardware-related or software-related.

Also Read: How to empty trash on Android phones

How to find out the reason behind vertical lines on Android?

How to fix vertical lines on Android?

As we mentioned earlier, you have to confirm whether the vertical lines on your phone are caused by a software glitch or hardware damage.

We assume that you have confirmed the same.

So if it is caused by a software glitch meaning that the screenshot has vertical lines as well, you can fix the issue by doing the steps mentioned below.

Yes, we know that this can sound like a fix that everyone knows but believe me, most of you would not have tried restarting your phone.

Most of the software bugs are caused by some weird settings that can be done on the phone by mistake.

So in order to reset those settings, you need to restart the phone so all settings go back to normal.

However, there is a chance that the issue might not be fixed by restarting the phone. If that’s the case, read along.

By cycling the battery, you might have a simple solution to this problem. Basically what you have to do is fully charge your phone to 100%, let it drain to 0% battery and then again charge it to 100% and see if the vertical lines are fixed or not.

Most of the time, one or two cycles of a battery can cause the problem to go away so we believe that this is a solution you can try.

But if your issue is still not fixed, please read on the other ways to fix this bug.

In order to fix this issue, the penultimate option is to restart your device in safe mode and see if the software bug is gone or not.

To enter safe mode, you need to press and hold the Power button like you would for restarting the phone.

Now, tap and hold the Power Off or Restart button for a few seconds and select the “Reboot to Safe Mode” whenever it pops up.

Once your phone is rebooted into safe mode, see if the problem is gone and if not, move to the last and final way to solve this problem.

The last thing you can do if everything else mentioned above has failed is to factory reset your phone and this will most probably solve all your problems.

Because the fact is that factory resetting your phone will remove all the junk apps, malware, and everything else from your device which is causing this problem in the first place.

Note that before factory resetting the phone, take a complete backup of your device’s data
This will ensure you that no data gets lost during this process

So how to factory reset your phone, here are the steps:

However, we did mention that this might be a hardware problem as well.

So in order to fix the problem caused by hardware issues, you only have one option.

Visit the nearest phone repair or send your device for RMA if it is covered under warranty.

Well, that is as straightforward as it gets. In order to fix vertical lines on an Android phone, you have plenty of options if it is a software issue and only one if it is hardware damage.

Using ADB Sideload, one can easily install and flash ZIP files on their devices, with the help of a single ADB command. This feature can only be used for installing ZIP files and nothing else....

Hulu is one of the biggest on-demand movie streaming services online. You can stream content from various TV networks on Hulu. The app is supported on various platforms including all the smart TVs,...